Gottfried Vollmer, an actor well-known in Germany from his roles in cinema and TV (‘Tatort’, ‘Alarm for Cobra 11’), came across Ayurveda (‘the science of (long) life’) in 1987 and studied it in its country of origin, India.

A graduate of the largest art school in Europe (Berlin University of Arts), he heard through acquaintances of an Ayurveda ‘pioneer’ course in India and was curious. At that time Ayurveda was not yet known in Europe—it was still considered an ‘insider tip’. 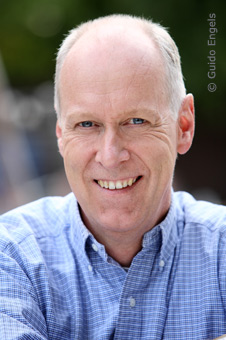 ‘That was a powerful experience,’ Vollmer says. ‘There were 500 participants from all over the world. The course was led by the Vedic scholar Maharishi Mahesh Yogi and Dr. Ulrich Bauhofer, one of today's leading German Ayurvedic physicians’.

‘Some of the best-known Indian Ayurveda authorities taught us: Dr. BD Triguna, then president of the All IndiaAyurveda Congress, and Dr. Balraj Maharishi, India's best connoisseur of medicinal flora’.

‘Even today I benefit from the great knowledge that was given to us at that time,’ says the 1.99 m tall actor.

‘I learned that in Maharishi Ayurveda awareness comes first, which means, consciousness shapes the body and keeps it in balance. At the same time it is important to work on the physiological level to always keep the body in good balance. That really changed my life. In India we learned the basic Ayurvedic principles and even today I live that way so I can keep my doshas in equilibrium.’

‘It always fascinates me, how Ayurveda achieves great things with simple means. For example, a small change in the daily routine. Or other small things like sipping hot water, or even going to bed at 10 o´clock at night, can balance the physiology long-term. For me, Ayurveda is very practical for everyday life. Without great expense, without much effort, you can achieve true balance in the physiology.’

‘My job requires that I travel a lot - thus vata dosha always easily gets increased. For this reason I do many things that balance vata dosha: for example, I make sure that between 12 and 2 o’clock I have a good, rich, nutritious, and above all warm meal, because I have realized that this is totally grounding and stabilizing. It gives energy for the whole day.’

‘This is a tool. Another is that I make sure—at least for a few days—to go to bed very early, especially if I am “falling behind” with my sleep, because I know that the cells are better nourished before midnight. That alone has a very stabilizing effect, and internal balance is better preserved than with a sleep deficit’.

‘In addition, I teach meditation,’ the actor surprised us. ‘Our society is running much faster in terms of time, and distances became closer and closer, and meditation is therefore now extremely popular.’

‘Many people slowly run into burnout. Here again, Ayurvedic knowledge helps me.  Sometimes I literally “order” clients to go to bed at 10 o’clock for one week, and report back. I check with them and have repeatedly had quite an amazing experience. For example, there was a male client with depressive disorders as a result of massive over work. But this one week during which he went to bed at 10 o’clock stabilized him enormously. I saw him every second day and could really see that meditation in conjunction with early bedtime had an amazing effect.’

‘In my circle of colleagues I also see that meditating is trendy.’

‘Transcendental Meditation, which I teach, has become very popular among actors, since word has spread that particularly international actors, or “half of Hollywood” have begun.’

‘Ayurveda also plays a role here,’ says Vollmer. ‘On the set, I see one or the other colleague running around with their small thermos flask filled with hot water; it makes you smile inwardly and you know: Aha, Ayurveda...’