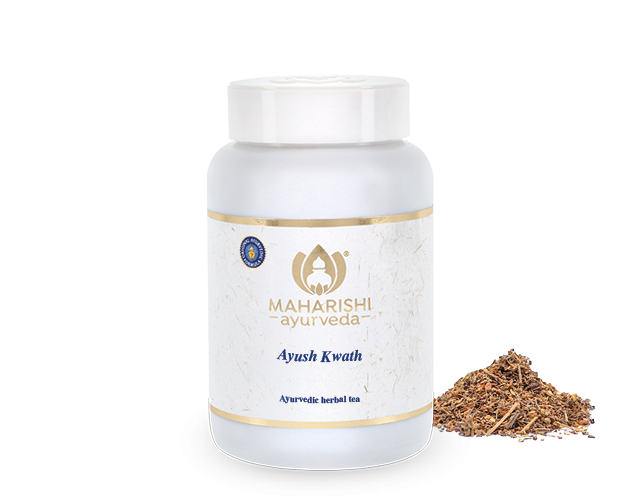 Ayush Kwath is a precious mixture of valuable ayurvedic herbs and spices such as "Holy Basil" (Ocimum sanctum), cinnamon, ginger and black pepper, which are prepared as a coarse powder. You can brew it like tea, using a teaspoon of the mixture, then filtering it; drink it once or twice a day. The Ayush Kwath decoction has a slightly pungent taste, but the cinnamon it contains gives this traditional recipe an interesting note.

The herbs of the highly praised ayurvedic Ayush Kwath power mixture have warming and Pitta-increasing properties, which are particularly recommended in cold weather and during the change of seasons. They boost Pitta and "Agni", the digestive fire *), at the same time also supporting the Vata Subdoshas Prana and Udana.

Depending on your taste and preference, you can also enjoy Ayush Kwath with jaggery, raisins and/or lemon juice.

Drink the mixture like tea once or twice a day.

Jaggery/raisins and/or lemon juice can be added according to taste.

Some aspects of Ayurveda knowledge are based on principles and perspectives that differ from Western science as we know it, so please read the important information we have compiled to help you.

For a detailed ingredients list and dosage of each product, please look under the specific product or call us: +31-475-529111. We also inform you about the respective best before date.