'"It is a great pleasure for me to confirm that Maharishi Ayurveda represents the traditions of Ayurveda at their highest level of effectiveness and completeness as propounded in the classical texts of this science. I have had the opportunity to examine at first hand the enormous contribution made by Maharishi Mahesh Yogi in re-enlivening this ancient system of health care and bringing its benefits to the people of the world. Maharishi Ayurveda makes available the principles and practice of Ayurveda in a complete, systematic and authentic manner, which has rarely been achieved in recent times in India . For example, Maharishi Ayurveda includes Yoga (including Transcendental Meditation and Asanas), Jyotish, Gandharva Veda and other Vedic disciplines which are considered vital for prevention and treatment by the ancient Ayurvedic texts. 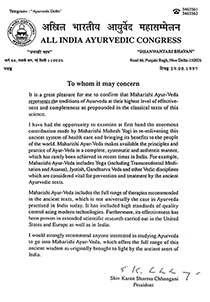